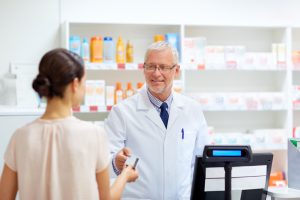 The expensive cost of prescription drugs has become a highly debated issue across the country. Nearly ever drug in the U.S. costs more than in other countries, and these prices have significantly increased over the years. In fact, it is estimated that drug costs in the U.S. will continue to climb by 5.6% each year until 2027. This dramatic rise causes many Americans to struggle to fill their prescriptions or take them as instructed, which ultimately has an impact on their health.

Part of this problem of high drug costs is people not being aware of how much they will have to pay until they are given the final bill. Although it is their responsibility to make a doctor’s appointment—be it a primary care doctor, dermatologist, or other specialist—patients often don’t have much choice in the medications they are prescribed. When they leave their physician’s office, they typically don’t know how much they’ll be paying for their medication until they get to their pharmacy. In addition, pricing fluctuates based on the patient’s insurance provider and plan, as well as pharmacy charges. Patients have the right to know how the cost of drugs compare when they discuss their treatment options with their doctor.

As part of the initiative to improve drug price transparency, the Trump administration released the “American Patients First” report in May 2018, which offers a comprehensive plan for controlling prescription drug costs and out-of-pocket costs. Some of the strategies in this plan include improving patients’ access to information and preventing “surprise billing.” One tactic for making this happen is the proposed law of requiring drug companies to include the list price of the medication (when over $35 per month) in all direct-to-consumer ads, such as in TV commercials.

The goal of requiring list prices in drug ads would be to lower the rising cost of drugs and prevent excessively high prices. Although list prices are often very different than what the patient pays after their insurance is factored, providing this information could potentially help create more competition and reduce out-of-pocket costs—not to mention help educate consumers. This proposed law is one of the biggest steps the U.S. has taken towards healthcare price transparency. Originally expected to pass in the summer, it has since been delayed, though this and many other drug transparency regulations are still being considered.

While drug transparency cannot guarantee that drug companies will lower their prices, it is an important step towards more affordable healthcare. When patients are well-informed, they tend to be more involved in their care. This allows them to be proactive in finding the best treatments for their needs and budget, ultimately leading to them live healthier lives.