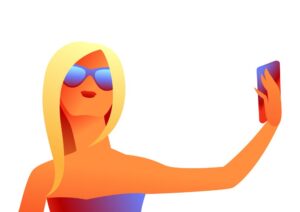 Excessive sun exposure, particularly at a young age, has been associated with accelerated skin aging as well as the development of skin cancers including melanoma. Despite numerous educational campaigns, changing behavior and attitudes towards sun exposure has been challenging. Still, dermatologists around the world are united and agree that proper skin care is vital to long term health and attractiveness. A recent study in Brazil took a novel approach to sun protection education and demonstrated to a large group of teens just how important skin care is.

In southeastern Brazilian city of Itauna, 1,573 secondary school students were recruited and enrolled in the study. The region is known for its high rates of ultraviolet light and sun exposure, and high rates of melanoma skin cancer. Researchers used a face-aging app in order to show students what they would look like in the future with poor skin care and suboptimal sun protective behaviors. Previous studies had concluded that appearance-based interventions could be more effective than other approaches to health education. The smartphone app Sunface therefore gave the teens a snapshot of the potential fallout that could be in store for them.

The Effects Of UV Rays

Ultraviolet rays from the sun can damage unprotected skin and speed up the aging process. The results were shocking to the participating teens. Students saw how their exposure could lead to premature sagging skin and wrinkles. Sun spots and cancerous skin lesions were also displayed on their skin with the app.

Melanoma is one of the more worrisome forms of skin cancer because of its aggressive nature and propensity to spread and metastasize in the body. Much of the population in this region of Brazil are fair complected with European ancestry, and at increased risk for sun damage.

This study was not meant to scare as much as it was to educate. It further demonstrated how technology could be used effectively to curb unhealthy behaviors in a patient population that is often hard to reach. Perhaps these new and novel approaches to patient education and promoting a healthy lifestyle will become more and more common as our reliance on technology continues to evolve. To learn more about how you can protect and preserve your skin, and which apps can help you do it, contact me!