Benzoyl peroxide is a common treatment for acne issues that is available both over the counter or in the form of some prescriptions. However, despite its prevalence and usefulness, you may not know exactly how it works. To understand this, there are a few things you should know first.

Acne is caused when oily secretions (called sebum) and dead skin cells clog up a pore near a follicle. When these pores get clogged, oil builds up under the skin and the “plug” formed becomes infected by a bacteria named P acnes. This in turn results in a pimple and inflammation. Acne on its own is harmless, but it can be painful and cause scarring. It is incredibly common, and most people get it at some point in their lives. 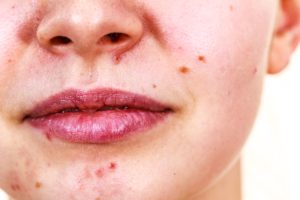 How Benzoyl Peroxide Can Help

The reason why benzoyl peroxide is so useful in combating acne is because it fulfills a variety of purposes that can help keep acne under control, though it cannot cure acne. The first part of how it works is the most useful one- it is an antiseptic, and when applied topically it kills the bacteria responsible for the pimple-causing infection in the first place. In addition to this, however, benzoyl peroxide also causes oxidization of the pimple and works as an anti-inflammatory. The oxidization is useful because it loosens up the materials in the pore that formed the plug in the first place, freeing up the oil, dead skin, and dirt. The anti-inflammatory properties of benzoyl peroxide can help reduce the painful soreness present.

Is Benzoyl Peroxide Right For You?

Benzoyl peroxide can be found in a variety of forms, ranging from topical creams and liquids to face washes, with over the counter concentrations ranging from 2.5 percent to 10 percent. These can be used to suit specific needs- for example, if you have minor, occasional blemishes, a topical cream applied to the area may be best, whereas if you have frequent breakouts with numerous, clustered acne blemishes a face wash would be appropriate. While it’s available in two concentrations, it’s worth noting that a 2.5 percent concentration of benzoyl peroxide has been found to both cause less skin irritation and will usually be as effective as a 10 percent concentration.

Benzoyl peroxide is very useful in combating acne, but there are some caveats: it can dry out your skin and cause peeling, which can cause some irritation. If you experience more serious side effects, like blistering, burning, or itching, you should immediately stop taking benzoyl peroxide.