Many of my patients ask if their diet somehow plays a role in their skin condition.  It’s actually an extremely common question. Patients want to know if something they are eating is contributing to their skin breakouts and rashes. 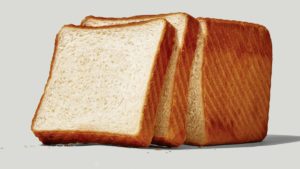 As fad diets and health trends come and go, this becomes and increasingly difficult question to answer. Patients may claim that their skin improves when they change their food habits, however without scientific evidence, dermatologists can often only offer optimism and encouragement.

I am therefore grateful that a group of investigators recently sought to determine if a low gluten or gluten-free diet could effect skin disease. Gluten has been related to Celiac Disease and a skin condition called Dermatitis Herpetiformis. In these condition, gluten incites an immune reaction that leads to inflammation in the body.

While Dermatitis Herpetiformis is somewhat rare, patients often wonder if other immune-mediated diseases including psoriasis and atopic dermatitis that have inflammation in the skin could also be worsened by gluten.

By examining the data of female participants in the Nurses’ Health Study II, investigators were able to calculate gluten intake for participants in the study’s psoriasis, psoriatic arthritis and atopic dermatitis analyses. Specifically, the average intake of gluten-containing foods (such as bread, pasta, beer and others) by the participants was recorded.

While 1,432 participants were noted to have psoriasis, 262 psoriatic arthritis, and 403 atopic dermatitis, no association between gluten intake and risk for any of these diseases was noted.

Even in analyses comparing high and low gluten consumers, no association was noted for psoriasis, psoriatic arthritis or atopic dermatitis.

No assessment of a strict gluten-free diet was available for this study. However, with this data, investigators were able to conclude that gluten was not a risk factor for these diseases in US adult women.

Drucker AM et al. Gluten intake and risk of psoriasis, psoriatic arthritis and atopic dermatitis among US women. J Am Acad Dermatol. 2019 Aug 9.